“While the Buland Darwaza gives the impression of living rock lifted from an ancient mountainside, the Rumi Darwaza looks like the diadem of a Queen.”

In the next part of my Journey through The Greatest Gates of India (Read More Here), I will visit the two most fascinating gates of the country. First up is the – Buland Darwaja.

Akbar shifted his capital 4 times within his reign of 49 years. Fatehpur Sikri was certainly his favourite because he himself built it with devotion. It may have been abandoned hastily because of debatable reasons but the effort he gave in building the city is clearly visible in the grandeur of the city. The reason is not unknown – Sikri was the village where the Great Sufi Saint Salim Chisti stayed and, here, Akbar got his heir, something he desperately needed. To celebrate his joy, A built this magnificent city. Clad in the beautiful red sandstone with works of marble, Fatehpur Sikri is a glorious exhibition of Mughal Architecture. Naturally, even after leaving the capital in 1585, to settle in Lahore, he did not stop adding gems to his dearest Fatehpur Sikri.

To celebrate his victory over the Deccan and Gujarat, Akbar ordered to build a gigantic gate on the South Wall of the Jami Masjid here. The Great Gateway or the Buland Darwaja was thus erected and is still the highest gateway in the world. It was not in the original plan and was later accommodated.

My Recommended Reads on India – Must for Every Traveller

The top of Buland Darwaja is almost 54 Meters high from the access road. The gateway is approached by rising 42 steps laid in a rectangular shape. Just like Akbar’s own religious belief, his buildings, including the Buland Darwaja, have an excellent mix of Hindu architecture & Islamic architecture. The Gate is semi-octagonal in shape and thus has an excellent visibility from all sides – reflecting the perfect sense of the architecture of the emperor.

The pointed arched gateway – a symbol of Persian architecture- is topped with a crown decorated with chhatris – a symbol of Indian Architecture. At the top of the gateway, there are thirteen small kiosks with chhatris in the front and three large kiosks – again with chhatris – in the back. The entire gate structure is clad in red & buff sandstone and the top of the chhatris are clad in white marble. The Main Gateway has a circular dome on top with three tires pointed arches in descending size clubbed with flat brackets. The angular sides, smaller in width, also has three tires and are decorated with pointed arches. The main gateway as well as the arches on the angular sides – all form a semi-hexagonal niche inside the pointed arches.

The surface of the gateway – the columns & the top of the arch are inscribed with Quranic verses and floral pattern – an import of the Muslims. Beautiful cravings with the white & black marble create a fantastic floral design on the surface of the gate. The three horizontal panel of stone inscription just above the pointed arch- a very common element in mMughalghal gates – is also used here. The matters of the inscription also bear the glory of Akbar’s tolerance towards all religions. One of the inscriptions describes his feat of victory in Gujarat & Uttar Pradesh while another describes the advice of Jesus Christ. Another inscription in ‘Nashk’, a distinct calligraphic style, drawn by Saint Hussain Chishti describes Quranic verses. 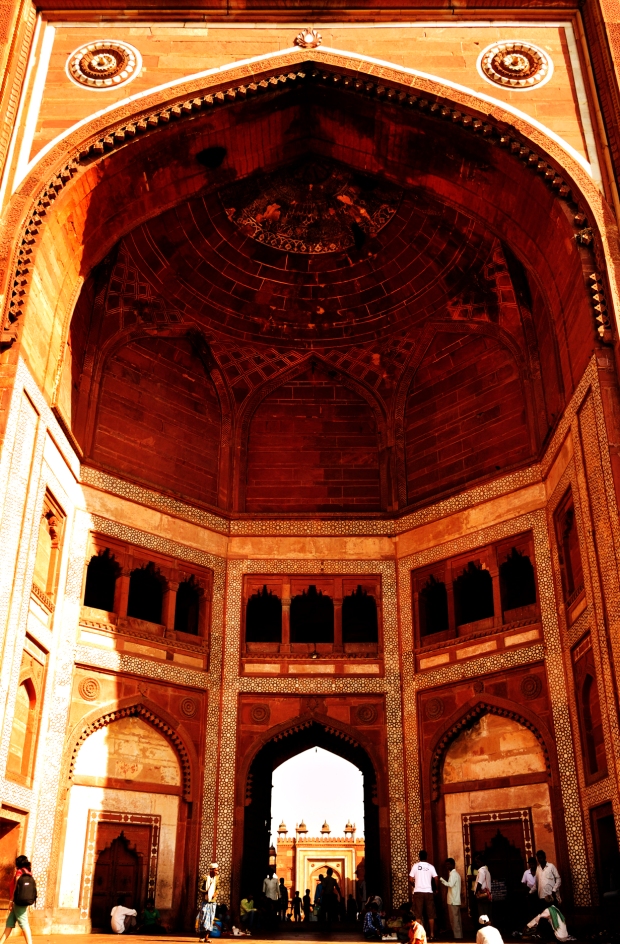 The Back of the Gate – visible from the courtyard of the Jami Masjid – is plain with three levels of terraces. The lowest of those has 11 small kiosks with chhatri is white marble while the next has two kiosks on two sides. the topmost level has the three large kiosks visible from the front as well. Three pointed arches form the lowest level of the gate – the central being the main gateway.

“This monumental gate, however, was probably less intended to commemorate a military victory than to underscore Akbar’s links with the Chishti order. Its surface is covered by marble slabs inscribed with Quranic verses promising paradise to true believers, appropriate for the entrance into a khanqah, a complex intended for meditation and devotion.”

Maybe, Akbar played a dual role by building this gigantic gateway, that stands high above the dusty village of Sikri. In a one way, he displayed his & his Kingdom’s might to all other and also made a gift to the followers of Islam & Sufism who would enter the great Jami Masjid and the Dargah of Salim Chishti through this massive structure. Like always, Akbar’s strong sense of diplomacy is visible in the biggest structure he built – The Buland Darwaja.

How to Reach: Public Bus is available from Agra but not very frequently and the road is also not very smooth. Cabs, Auto or Taxi can be availed from Agra.

Best Time to Visit: The Gate is open till the evening prayer in the mosque. Summer months should be avoided because the place becomes extremely heated.

18 thoughts on “The Greatest Gates of India – Buland Darwaza”